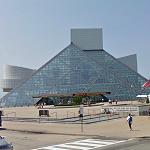 By kjfitz @ 2009-09-24 13:57:14
@ 41.508187, -81.693892
Cleveland, Ohio (OH), US
The Rock and Roll Hall of Fame and Museum is a museum located on the shores of Lake Erie in downtown Cleveland, Ohio, United States, dedicated to recording the history of some of the best-known and most influential artists, producers, and other people who have in some major way influenced the music industry, particularly in the area of rock and roll. The museum is part of the city's redeveloped North Coast Harbor.
Links: en.wikipedia.org, virtualglobetrotting.com
1,093 views