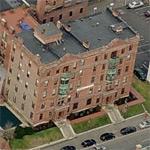 By neotrix @ 2012-08-30 11:41:54
@ 43.07539679, -70.7594642
Portsmouth, New Hampshire (NH), US
The Rockingham Hotel is a historic hotel that was originally built in 1785 as a residence by Woodbury Langdon, prominent merchant and politician. Thomas Coburn converted it into a hotel which opened November 1, 1833. Frank Jones, who was, among other things, mayor of Portsmouth, a US Representative, and a brewer, bought it in 1870. After a fire in 1884, Jones rebuilt it extensively. The only significant part saved from Langdon's mansion was the dining room, which is now the Library Restaurant.

The building incorporates lions, Jones's personal symbol, terra cotta sculptures of the Four Seasons of Man, and busts of Jones and Langdon. It was a hotel until 1973 and is now condominiums. The building has been host to presidents George Washington, Franklin Pierce, James K. Polk, Theodore Roosevelt, Chester A. Arthur, William H. Taft and John F. Kennedy.

It was added to the National Register of Historic Places in 1982.
Links: en.wikipedia.org
732 views