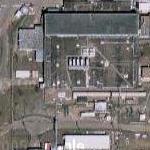 By kjfitz @ 2005-08-05 17:00:31
@ 39.893341, -105.201967
Golden, Colorado (CO), US
One of the seven original primary nuclear wepons component facilities, Rocky Flats is a 6,550 acre site, 16 miles from downtown Denver. The site has a heavily industrialized 384 acre complex, surrounded by a mostly undeveloped buffer zone. Rocky Flats made the nuclear "pits", the fissile plutonium cores of nuclear bombs. The facility was operated for many years by Rockwell International, until it was raided by the FBI in 1989, due to suspected (and later confirmed) criminal radioactive material management violations. Production of plutonium pits stopped at that point, and the EG&G Corporation took over the management of the plant, then the Kaiser Hill Company later took over management from EG&G. The Department of Energy, which owns the heavily contaminated facilty, has changed its name to the Rocky Flats Environmental Technology Site.
Links: clui.org, en.wikipedia.org
2,444 views