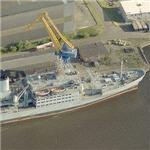 Fort Austin was laid down at Scott Lithgow in 1975, launched in 1978 and commissioned in 1979. These ships were designed to carry a wide range of stores to support other ships, ammunition, food, expolsives. They have extensive aviation facilities,with two flight decks, one to the stearn and one spot on top of the hanger,up to four Sea Kings can be stored in the large hanger. These ships also have the capability to replenish ships at sea, via six RAS points. When the Falklands War began, the ship headed south, taking part in the landings at San Carlos Water as an ammunition ship. In 2000, the ship was part of the British deployment to help restore order in Sierra Leone.

As of September 2007, the ship is undergoing a major refit and modernisation at the A&P Tyne shipyard in Hebburn, Tyne and Wear.
Links: en.wikipedia.org
1,155 views