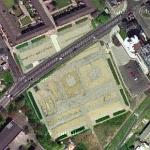 By Hinkkanen @ 2006-04-02 15:36:58
@ 54.987809, -1.532003
Wallsend, United Kingdom (GB)
The fort lies at the eastern end of Hadrian's Wall (thus the modern name of the city, Wallsend) and on the banks of the River Tyne. It was in use as a garrison for approximately 300 years. The site of the fort now contains the excavated remains of the buildings' foundation of the original fort, as well as a reconstructed Roman bath. A museum contains items of interest that were found when the site was excavated. A portion of the original wall is visible across the street from the museum, and a reconstruction of what the whole wall might have looked like when new.
Links: www.roman-britain.org
1,039 views