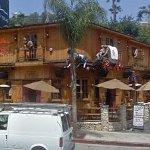 The first Saddle Ranch Chop House opened its doors on the Sunset Strip in September 1999, to rave reviews, tons of press, and hoards of people lining up to enjoy the delicious Saddle Ranch cuisine and ride the only mechanical bull in Los Angeles. From the second it opened, the Saddle Ranch concept was a huge success and a favorite of Hollywood. Television shows, books and magazines began developing story lines around the restaurant almost immediately. Saddle Ranch and its infamous mechanical bull have been featured on countless shows including "Sex and the City," "Desperate Housewives," "American Idol," "Six Feet Under," "VH1’s Rock of Love" and numerous more. Saddle Ranch had become a brand known nationwide, even before its second location opened in 2003 at Universal CityWalk, Hollywood. Two additional locations opened in Arizona in 2008; one in the heart of Old Town Scottsdale, and one in Glendale’s exciting new Westgate City Center development. Saddle Ranch is currently developing additional locations for expansion in the coming years.
Links: www.thesaddleranch.com
736 views