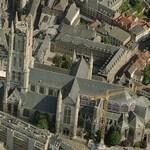 The building is based upon the Chapel of St. John the Baptist, a primarily wooden construction; it was consecrated in 942 by Transmarus, Bishop of Tournai and Noyon. Traces of this original structure are evident in the cathedral's crypt.

The chapel was subsequently expanded in the Romanesque style in 1038. Some traces of this phase of expansion are still evident in the present day crypt.

In the subsequent period from the 14th through 16th centuries, nearly continuous expansion projects in the Gothic style were executed on the structure. A new choir, radiating chapels, expansions of the transepts, a Chapterhouse, nave aisles and a single tower western section were all added during this period. Construction was considered complete June 7, 1569.

In 1539, as a result of the rebellion against Charles V, the old Abbey of St. Bavo was dissolved. Its abbot and monks went on to become canons in a Chapter that was attached to what then became the Church of Saint Bavo. When the Diocese of Ghent was founded in 1559, the church became its Cathedral. The church of Saint Bavo was also the site of the baptism of Charles V.
Links: en.wikipedia.org
998 views