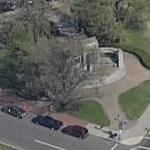 Hahnemann (1755-1843) was a German physician who discovered homeopathic medicine, a branch that was not recognized by the American Medical Association and was resisted by pharmacists since he argued that patients benefited from much smaller doses of drugs than were customarily prescribed. Among the proponents of homeopathy were John D. Rockefeller and Mark Twain.

The monument includes a beautiful mosaic above the seated life-size figure of Hahnemann. Beneath his statue is the saying, "Similia Similibus Curentur" -- Likes Are Cured By Likes, the founding principal of homeopathy. Other inscriptions are: "Die Milde Macht Ist Gross" (Gentle Power Is Great) and "In Omnibus Caritas" (In All Things Charity).

The statue was erected by the American Institute of Homeopathy.