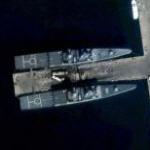 The helicopter deck at the stern has a single landing spot for a medium size helicopter, such as the Eurocopter AS 365 Dauphin or the larger AS 532 Cougar or NH90 helicopters.
Links: en.wikipedia.org
910 views