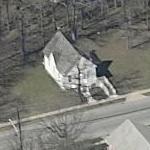 The Seabrook community was named for Thomas Seabrook, a topographical engineer employed by the Philadelphia Railroad. The Railroad company also named the train station built in the area after Seabrook.

Thomas Seabrook envisioned a community in the area built on a co-op basis. He built 3 Victorian cottages, a park known as Deer Park consisting of a picnic area (an enclosed area for several tame deer), and a baseball diamond. According to Sara Lumpkins a longtime residence of Seabrook and the Post master from 1949-1972, the Pennsylvania Railroad ran trains from Baltimore and Washington in the late 1800's bringing families to spend the day in the park

Seabrook March 1950 classSchool prior to 1895 was held in a room above Binnix Store and Post Office across the RR tracks. In 1895, a group of families met to petition the School Board to build a new school in the area. The Board agreed to fund $500 for its construction.

After considerable controversy about the site of the new school, the group agreed to build on land provided by Thomas Seabrook. The School opened as a one-room school for Grades 1-6. In 1953 when the Seabrook Elementary School was completed, the building was sold to the Seabrook Civic Association.

In the early 1990's the Assoc., no longer able to maintain the building, turned it over to M-NCPPC. The Commission began plans for its restoration in 1995. Most of the original materials in the building were preserved.

The School House now occupies a 1/2 acre lot and is one of the few one-room schools that has been preserved in the county. It is currently a museum that is open to the public for special events, school tours, and by appointment.
Links: www.pgelegantsettings.com
913 views