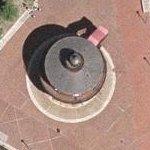 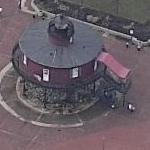 Welcome to the Seven Foot Knoll Lighthouse, the oldest surviving screw-pile lighthouse built as an aid to navigation on the Chesapeake Bay. The lighthouse was built in 1856 at the mouth of the Patapsco River, where it marked the shoal known as Seven Foot Knoll for 133 years.

The innovative screw-pile lighthouse design, which made its first appearance in the United States in 1850, eliminated the need for underwater masonry foundations to support a lighthouse. Screw-pile lighthouses were suspended above the water by a system of cast-iron pilings with corkscrew-like bases, which could be screwed into the soft mud of the sea floor. The Seven Foot Knoll Lighthouse was the second screw-pile lighthouse built on the Chesapeake Bay and was constructed on nine cast-iron screw piles supporting a gallery deck some nine feet above mean high water. The structural members were fabricated at the Baltimore iron foundry of Murray and Hazelhurst, and the total cost of construction was $43,000. The lighthouse was equipped with a 4th order Fresnel lens visible for 12 miles.

From 1856 until 1919, keepers at Seven Foot Knoll lived in the lighthouse along with their families. Between 1919 and 1948 keepers worked in pairs, with each receiving 8 days of shore leave per month. Probably the most remarkable event in Seven Foot Knoll’s history took place on August 21, 1933 when Keeper Thomas J. Steinhise risked his life in the face of fifteen-foot seas and 90-mph winds to assist the sinking tugboat Point Breeze. After hearing a distress whistle shortly after midnight, Mr. Steinhise took the station’s small motor launch in the direction of the whistle and was able to rescue five of the tug’s crew from drowning. Steinhise was awarded the Silver Lifesaving Medal for his heroism.

The lighthouse was automated in 1949 and the Coast Guard maintained the light, but unfortunately the structure fell victim to its age and the elements. By the late 1960’s, plans were underway to retire the light and replace it with a new navigation marker. The lighthouse was finally moved to the Inner Harbor in Baltimore in 1988.

The Coast Guard generously donated the lighthouse to Baltimore City in 1989 to be preserved as an historic landmark. With grants from the Maryland Historical Trust and Wheelabrator Corporation, and the enthusiastic help of the Steinhise family, volunteers and students, the restoration project was completed in approximately one year.

In 1997 the Seven Foot Knoll Lighthouse became part of the Baltimore Maritime Museum to be preserved for generations to come.
Links: www.baltomaritimemuseum.org
745 views