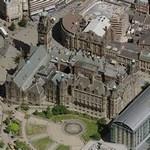 By DonMartini @ 2007-01-02 03:14:15
@ 53.380305, -1.469212
Sheffield, United Kingdom (GB)
Sheffield Town Hall is a building in the City of Sheffield, England. The building is used by the City Council, and also contains a publicly displayed collection of silverware. The current building, Sheffield's fourth town hall, is located on Pinstone Street. It was designed by the London-based architect E. W. Mountford and constructed over a seven year period from 1890 to 1897, opening on 21 May 1897. An extension designed by F. E. P. Edwards was completed in 1923.

The design echoed to a certain extent the architecture of the adjacent St. Paul's Church of 1720 (now demolished). The exterior is built of "Stoke" stone from the Stoke Hall Quarry in Grindleford, Derbyshire and is decorated with carvings by F. W. Pomeroy. The friezes depict the industries of Sheffield, and the 64 metre high clock-tower is surmounted by a statue of Vulcan. During construction, the building was criticised for its expensive embellishments.

The building was opened by Queen Victoria, using a remote control lock from her carriage. The turning of the key in the lock triggered a light in the building which was the signal for three concealed men to open the gates.
Links: en.wikipedia.org
1,157 views