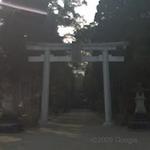 By adrbr @ 2011-04-22 09:09:56
@ 32.261633, 131.560455
Tsuno, Japan (JP)
A torii is a traditional Japanese gate most commonly found at the entrance of or within a Shinto shrine, where it symbolically marks the transition from the profane to the sacred (see Sacred-profane dichotomy). The presence of a torii at the entrance is usually the simplest way to identify Shinto shrines, and a small torii icon represents them on Japanese road maps. They are however a common sight at Japanese Buddhist temples too, where they stand at the entrance of the temple's own shrine, called chinjusha (鎮守社, tutelary god shrine?) and usually very small.
Links: en.wikipedia.org
597 views