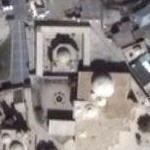 By kjfitz @ 2009-12-18 14:18:08
@ 40.366276, 49.833351
Baku, Azerbaijan (AZ)
Palace of the Shirvanshahs is the biggest monument of the Shirvan-Absheron branch of the Azerbaijan architecture, situated in the Inner City of Baku. The complex contains the main building of the palace, Divanhane, the burial-vaults, the shah's mosque with a minaret, Seyid Yahya Bakuvi's mausoleum, a portal in the east - Murad's gate, a reservoir and the remnants of the bath-house.