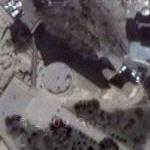 The Maiden Tower is a noted landmark and one of Azerbaijan's most distinctive national emblems. It is featured on Azeri currency notes and other official pieces of paper. It houses a museum and a gift shop. The view from the roof takes in the alleys and minarets of the Old City, the Baku Boulevard, the De Gaulle house and a wide vista of the Baku Bay. In recent years the brazier on the top has been lit during the nights of the Novrous festival.
Links: en.wikipedia.org
589 views