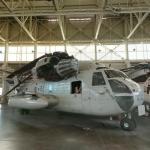 The dimensionally-similar CH-53E Super Stallion is a heavier-lifting, improved version designated S-80E by Sikorsky. Its third engine makes it more powerful than the Sea Stallion, which it has replaced in the heavy-lift mission.
Links: en.wikipedia.org
798 views