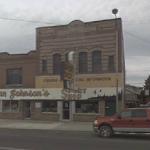 By Mike1989 @ 2013-04-16 11:31:01
@ 45.99394, -112.512719
Butte, Montana (MT), US
The Socialist Hall in Butte, Montana is one of the few socialist halls remaining in the United States. Erected in 1916, when the Socialist movement was strong in the city, it was active for only a few years until socialism fell out of favor amidst persecution of socialists and labor unionists including the Anaconda Road Massacre and the lynching of Frank Little.

During its brief time of service, the Industrial Workers of the World met here, also holding meetings in Butte's Finlander Hall.

Today a sporting goods shop occupies the first floor of the former Socialist Hall. The building is physically outside the boundaries of the Butte-Anaconda-Walkerville National Historic Landmark District, but is included with it for documentation.
Links: en.wikipedia.org
689 views