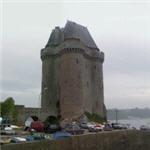 It was built between 1369 and 1382 by duke Jean IV de Bretagne, to control access to the Rance at a time when the city of Saint-Malo did not recognize his authority. Over the centuries the tower lost its military interest and became a jail. It is now a museum celebrating Breton sailors exploring Cape Horn.

The Solidor tower is located in the former city of Saint-Servan, which merged with Saint-Malo in 1967.
Links: en.wikipedia.org
783 views