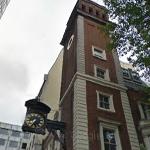 By kkeps @ 2012-08-10 20:20:40
@ 51.510545, -0.087796
London, United Kingdom (GB)
St Martin Orgar was a church in the City of London in Martin Lane, off Cannon Street, most famous as being one of the churches mentioned in the nursery rhyme "Oranges and Lemons". Most of the building was destroyed in the Great Fire of London in 1666, but the tower and part of the nave were left standing. The parish was merged with St Clement Eastcheap.

The remains of the church were restored and used by French Protestants until 1820. Most of the remaining building was then pulled down, but the tower remained and was rebuilt in 1851 as the campanile of St Clement Eastcheap. The churchyard of St Martin's remains to the south of the campanile.
Links: en.wikipedia.org
610 views