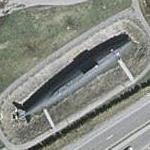 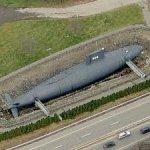 By kjfitz @ 2006-04-30 12:00:57
@ 43.08227066, -70.76693397
Portsmouth, New Hampshire (NH), US
USS Albacore holds a place in history as the first Navy-designed vessel with a true submarine hull form, in which surface characteristics were subordinated to underwater performance. She possessed no weapon systems; her sole function was to conduct experiments. During her early trials, she set a new underwater speed record with improved control. From 1955 to 1971, Albacore served in five distinct phases of experimentation, carrying out tests of speed, depth changes and underwater maneuvering. Through a series of configurations, she provided the model for all future U.S. Navy and many foreign submarines that followed.

U.S. Navy scientists used Albacore as a floating laboratory to test sonar devices, hydrophones, diving brakes and emergency escape systems. She also served as a high-speed, almost noiseless target for anti-submarine warfare. In 1966, she again set a new submerged speed record, earning a reputation as the world's fastest submarine. Albacore was retired from service in 1972, and transferred to the Portsmouth Submarine Memorial Association in 1984. She was placed in a permanent dry berth and opened to the public in October 1985.