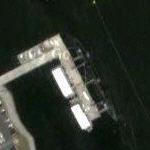 Picture of the two docked subs.

Constructed by Newport News Shipbuilding and Dry Dock Company, her keel was laid on 3 December 1962. She was launched on 20 December 1963.

On 10 June 1985, it was announced by the White House that the United States would dismantle a ballistic missile submarine to remain within the SALT II ceiling on MIRVed missiles. RAYBURN, now under the command of CDR G. R. Lattig, USN was selected to fulfill this requirement and was deactivated on 16 September 1985, after more than twenty years of service, with missile tubes filled with concrete and tube hatches removed. She subsequently underwent concurrent availabilities at Charleston Naval Shipyard for missile dismantlement and refueling/conversion to a Moored Training Ship (MTS) to train personnel in the Nuclear Power Program.

The MTS Project had been approved in February of 1984 without the selection of a particular hull. RAYBURN was now available for this project thus preventing total scrapping. The dismantlement and conversion required removal of the majority of the missile compartment, ripout and modification of the operations compartment to hold office and training space, installation of a second diesel generator and special mooring arrangements including a mechanism to absorb power generated by the main propulsion shaft. The first training class reported on 10 July 1989 and official decommissioning of the ship took place shortly thereafter on 28 August 1989.

USS DANIEL WEBSTER (SSBN-626) was the ninth LAFAYETTE - class nuclear powered fleet ballistic missile submarine and the only submarine in her class with its diving planes not located on the sail but forward on the bow. Decommissioned and stricken from the Navy list on August 30, 1990, the DANIEL WEBSTER was subsequently converted to a Dockside Trainer (S5W Prototype facility), located at Naval Nuclear Power Training Unit, Charleston, SC.
1,374 views