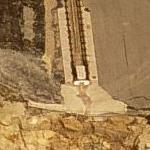 By Parabellum @ 2008-06-18 10:24:27
@ 37.22413, -113.221538
Hurricane, Utah (UT), US
Coleman Engineering began construction of the facility during the summer of 1954. The track consisted of 12,000 feet of continuously welded, heavy-duty rails that formed the longest rocket research track in the United States to that date. The entire facility included the track, launching pad, crew shelters, camera towers, rocket storage depots, water system, power system, communication system, security facilities, administration building, and a shop building. Coleman had completed the base by July 8, 1955, when the first test took place.

Testing at the site typically involved hurling a rocket sled, carrying a seat with a dummy known as "Hurricane Sam" strapped to it, along the track at a speed of 1,050 miles per hour (Mach 1.3). "Sam," in actuality, was a highly instrumented anthropoid simulator with electronic equipment and a radio connected to it. Just before reaching the edge of the cliff the ejection mechanism fired, flinging the dummy over the precipice where its parachute opened and it floated to the valley floor.

This article says the facility closed in 1961 but it appears to still be in use.
Links: historytogo.utah.gov
1,439 views