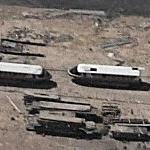 As monorails Coral and Lime, these two six-car monorail trains handled millions of riders at Walt Disney World. Then in 1995, they became the first monorails for the Las Vegas system. Handling 5 million passengers annually until retirement in early 2003, they led the way to the development of a new mass transit system for the city of Las Vegas.

Now sitting on blocks south of the city, these monorails have had a less-than-proud retirement. While there is talk of buyers, these monorails remain open to the elements, fully vandalized, in an open storage yard near railroad tracks. There are vehicles of far less historic significance that have been fully restored to sit proudly in museums across the world.
Links: www.mouseplanet.com
6,824 views