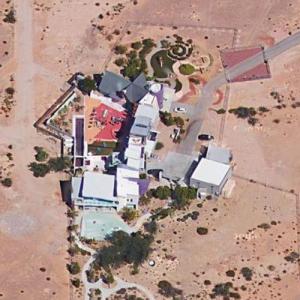 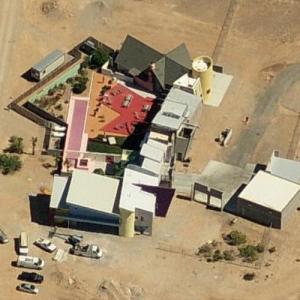 By tlp333 @ 2006-10-10 14:01:56
@ 36.032968, -115.257387
Las Vegas, Nevada (NV), US
Penn Jillett 1/2 of the duo Penn & Teller lives here. Best known as an American magician, actor, musician, inventor, television personality, and best-selling author, Jillett’s most renowned performances have been beside fellow magician Teller as half of the team Penn & Teller. The duo has been featured in numerous stage and television shows such as Penn & Teller: Fool Us, and Penn & Teller: Bullshit!, and is currently headlining in Las Vegas at The Rio. Jillette serves as the act's orator and raconteur, with Teller famously never speaking a word. Jillette has published eight books, including the New York Times Bestseller, God, No!: Signs You May Already Be an Atheist and Other Magical Tales. He is also known for his advocacy of atheism, scientific skepticism, the First Amendment, libertarianism, and free-market capitalism.

He purchased this house in Las Vegas and dubbed it "The Slammer." "The Slammer" has been featured in dozens of television shows and articles since it was built, Penn currently records music there, and also uses it as a studio.

It was in the mid 80s that Jillette oppositeTeller and they gradually switched from performing tricks to co-emceeing one of the most popular nightclub acts in the United States. To climb to stardom they would dazzle the audience with various tricks including juggling knives, swallowing massive embroidery needles, eating fire, and all other kinds of death defying mayhem. Their incredible skill put the two men on Saturday Night Live, after which they branched out into concert films and movie roles (My Chauffeur, Tough Guys Don't Dance). The duo would then continue their career as mostly film, TV, and a live Vegas residency.

Penn Jillette Has a net worth of $175 Million. A pretty hefty sum for a magician to rake in, but that’s showbiz. Such an incredible career as an entertainer has made Penn Jillette one of the most recognizable faces in the world.
Links: en.wikipedia.org
39,752 views