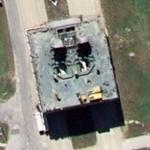 By dda @ 2006-10-23 11:45:33
@ 28.622531, -80.620876
Florida (FL), US
The crawler-transporter is a tracked vehicle used to transport the Saturn V rocket, the Saturn IB rocket during Skylab and Apollo-Soyuz Test Project, and now the Space Shuttle, from NASA's Vehicle Assembly Building to the Launch pad on a Mobile Launcher Platform. The crawler-transporter, built by the Marion Power Shovel Co. at a cost of $14 million, was once the largest tracked vehicle in the world; it has since been surpassed by the German Bagger 288 excavator.
Links: en.wikipedia.org
914 views