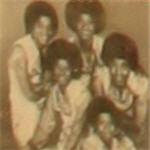 Sigmund Esco "Jackie" Jackson (born May 4, 1951) is an American singer and musician, a member of The Jackson 5, and the second child in the Jackson family.

Toriano Adaryll "Tito" Jackson (born October 15, 1953) is an American singer and lead guitarist and original member of The Jackson 5, who later changed their name to The Jacksons, who rose to fame in the late 1960s with the Motown label, later finding success under the Epic label in the 1970s and 1980s.

Jermaine LaJuane Jackson (also known as Mohammad Abdul Aziz) (born December 11, 1954) is an American singer, bassist, composer, a member of The Jackson 5 and occasional film director. He also produced and recorded duets with American singer Whitney Houston in her early years as a recording artist and was also a producer for Bobby DeBarge's band Switch.

Michael Joseph Jackson (August 29, 1958 – June 25, 2009) was an American recording artist, entertainer and businessman. Often referred to as the King of Pop, or by his initials MJ, Jackson is recognized as the most successful entertainer of all time by Guinness World Records.
Links: en.wikipedia.org
1,405 views