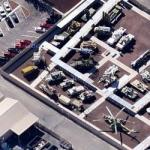 By pdunn @ 2005-10-25 15:29:18
@ 36.23085037, -115.05130505
Las Vegas, Nevada (NV), US
The Threat Center showcases opposition Anti Aircraft missiles, and other anti air threats so pilots can gain a better familiarity of what they are up against. Visible here are a Hind Helicopter, an SA-13 mobile missile launcher, six armored personnel carriers, various mobile anti aircraft artillery platforms, three fighter planes, and a number of very large surface to air missiles of all types placed horizontally on the ground.

This image illustrates just how nearly impossible it is to recognize missiles or other large threats on the ground from the resolution provided in Google' satellite imagery.

There is some great footage of the Threat Center in the new IMAX film on video: Fighter Pilot: Operation Red Flag
1,458 views

kjfitz
@ 2005-10-25 16:34:02
You say, "This image illustrates just how nearly impossible it is to recognize missiles or other large threats on the ground from the resolution provided in Google' satellite imagery."

But I have to disagree. It goes to show how limited the views are in GOOGLE LOCAL (aka GOOGLE MAPS) but the same data viewed in Google Earth gives you something like 3x the magnificatin and those missiles, tanks and helos are quite clear.

Add an accurate scale with which to measure things and good references to with which compare those measurements, pay attention to shadows and support facilities and it is often very simple or at least not impossible to identify things given the resolution of these maps.

theres nothing better than the real thing.

Alkavian
@ 2010-08-20 19:07:09
I have to agree with Kjfitz. You can, using proper technique, clearly figure out what is shown in the image. Of course there are some things which resolution and scale make it impossible to determine.

In this museum, not having been there myself, and just looking at what imagery is available, can see: