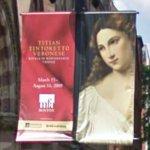 By WacoKidd110 @ 2013-04-29 10:58:15
@ 42.350052, -71.077517
Boston, Massachusetts (MA), US
Titian, Tintoretto, and Veronese. Although forty years separate the birth of Titian from that of Veronese, the careers of the three painters overlapped for almost four decades, and the eloquent record of their artistic dialogue is most apparent when the powerful canvases each produced are considered side by side. Juxtapositions of two, three, and sometimes four paintings demonstrate how much these three artists were influenced by one another and how they used their paintings as critiques.
Links: www.mfa.org
541 views