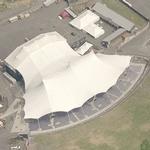 By adrbr @ 2008-05-08 18:56:20
@ 41.347331, -75.663448
Scranton, Pennsylvania (PA), US
Montage Mountain Amphitheater started as a temporary facility located behind the ski lodge on Montage Mountain. In 1999, Lackawanna County built a permanent amphitheater further down the mountain. The new location has reserved seating for 7,000 people covered by the pavilion roof, with room for another 10,500 on the lawn. In 2002 the operation of the facility was taken over by Clear Channel Communications and the building became known as the Ford Pavilion at Montage Mountain. In June of 2005, upon their first visit to Northeastern Pennsylvania and the Toyota Pavilion, the Dave Matthews Band became the first concert to ever completely sell out the pavilion attracting over 18,000 people. On their return in July of 2006, they once again sold out the pavilion. In 2006, the entertainment group splintered away from Clear Channel, becoming a new, independent, company, Live Nation, and the amphitheatre changed name again, this time to Toyota Pavilion on Montage Mountain. On February 15, 2007, the tent roof of the pavilion collapsed under the weight of snow and ice that had fallen from the Valentine's Day Blizzard of 2007. A new roof was completed in time for the summer 2007 concert season.
Links: www.livenation.com, en.wikipedia.org
4,480 views