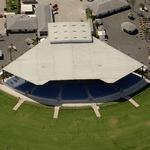 Since opening, the venue has gone through numerous name changes. It was initially named Coral Sky Amphitheater because the seats face into the west, often in view of a colorful sunset. After many years becoming familiar with that name, people still use that name despite the various sponsorships and name changes since then. The first sponsor was Mars Music, but when Mars filed for Chapter 11 bankruptcy in 2002, the Coral Sky name was returned. After a short return to the Coral Sky name, it changed again when Sound Advice became the new sponsor. In early 2008, the venue was renamed again following a new sponsorship agreement with Cruzan Rum.

On June 15th, 1998, the Spice Girls performed to a sold out crowd as part of their Spiceworld Tour. It was their first ever American concert and it was the opening night to the American leg of the tour. The group performed as a four piece due to Geri Halliwell's departure from the group just 16 days before the concert.
Links: www.livenation.com
6,366 views