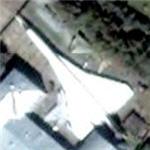 Western observers nicknamed the plane Concordski (sometimes Konkordski), sounding like a Russian surname yet still very close to the Concorde, to which the Tu-144 was visually similar. A prototype first flew on 31 December 1968 near Moscow, two months before Concorde. The Tu-144 first broke the sound barrier on 5 June 1969, and on 15 July 1969 it became the first commercial transport to exceed Mach 2, and the fastest commercial airliner ever.
Links: en.wikipedia.org, boingboing.net
9,397 views