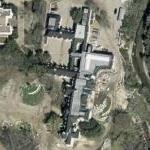 By kjfitz @ 2007-08-21 11:39:28
@ 32.885727, -96.823266
Dallas, Texas (TX), US
DALLAS [July 2002] —The city's priciest home—a $44.9 million French chateau-style behemoth just down the road from billionaire Ross Perot—was destroyed in a massive blaze Thursday just weeks before its completion. The mansion, called the Chateau Du Triomphe and listed on the Christie's auction site, burned for eight hours before firefighters were able to extinguish the blaze.

Dallas Fire Department Lt. Doug Dickerson said about 300 firefighters fought the blaze in the exclusive neighborhood of Preston Hollow but couldn't save the home. Damage was pegged at $20 million. Four firefighters were injured as the flames erupted about 1 a.m. Thursday from the roof of the main house of the 10-acre estate. Two firefighters were treated for heat exposure, and two had minor burns when they were hit with falling debris.
Links: www.braddye.com
43,126 views