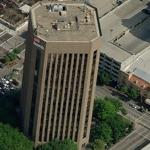 Originally "Idaho First Plaza," the building was the headquarters of the Idaho First National Bank, which was founded in 1867. Following acquisitions in neighboring states, IFNB was renamed West One Bank in 1989, and was acquired by U.S. Bank of Portland in 1995.

In 2000, the building was purchased by the property development firm Unico.
Links: en.wikipedia.org
716 views