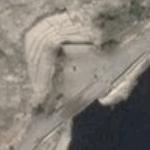 By kjfitz @ 2008-01-23 16:06:02
@ 44.496352, 33.593616
Sevastopol, Ukraine (UA)
An underground, formerly classified submarine base that was operational until 1993. The base was said to be virtually indestructible and designed to survive a direct atomic impact. During that period, Balaklava was one of the most secret residential areas in the Soviet Union. Almost the entire population of Balaklava at one time worked at the base; even family members could not visit the town of Balaklava without a good reason and proper identification. The base remained operational after the collapse of the Soviet Union in 1991 until 1993 when the decommissioning process started. This process saw the removal of the warheads and low-yield torpedoes. In 1996, the last Russian submarine left the base, which is now open to the public for guided tours around the canal system, the base, and a small museum, which is now housed in the old ammunition warehouse deep inside the hillside.
Links: russos.livejournal.com, www.artificialowl.net
4,000 views