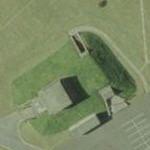 By kjfitz @ 2008-07-15 15:52:18
@ 51.419888, -2.220445
Corsham, United Kingdom (GB)
A 35 acre subterranean Cold War City that lies 1000 feet beneath Corsham. Built in the late 50s this massive city complex was designed by Government personnel in the event of a nuclear strike. A former Bath stone quarry the city, code named Burlington, was to be the site of the main Emergency Government War Headquarters - the hub of the Country's alternative seat of power outside London.

Over a kilometre in length, and boasting over 60 miles of roads. Blast proof and completely self-sufficient the secret underground site could accommodate up to 6,000 people, in complete isolation from the outside world, for up to three months.

An underground lake and treatment plant could provide all the drinking water needed whilst 12 huge tanks could store the fuel required to keep the four massive generators, in the underground power station, running for up to three months. And unlike most urban cities, above ground, the air within the complex could also be kept at a constant humidity and heated to around 20 degrees. The city was also equipped with the second largest telephone exchange in Britain, a BBC studio from which the PM could address the nation and an internal Lamson Tube system that could relay messages, using compressed air, throughout the complex.
Links: underground.cityofember.com, www.higgypop.com
7,586 views