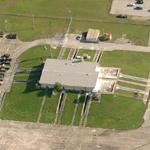 In the SW corner of KMCO (Orlando International Airport) is the former "alert tree" where the B-52s sat on nuclear alert. At the top of the alert tree is this alert bunker where SAC flight crews on alert duty stayed until the warning klaxon sounded and they ran out of this bunker to their waiting B-52s.
Links: en.wikipedia.org
4,329 views