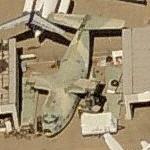 By kjfitz @ 2007-08-22 11:11:33
@ 32.126756, -110.95672
Tucson, Arizona (AZ), US
The C-123 Provider, designed originally as an assault glider aircraft for the United States Air Force by Chase Aircraft, was developed into a powered transport aircraft by the Fairchild Company, and went on to serve most notably with various armed forces in South East Asia. The aircraft itself would also be the testbed for a number of experimental versions designed at improving its Short Take-Off and Landing (STOL) capabilities, and was even developed into a bomber that was tested by the USAF.

In 1980, the Royal Thai government, seeking to extend the life of their C-123 fleet, placed a contract with the Monarco Aircraft Company, supported by the USAF, to convert a single C-123B to turboprop powerplants. Allison T56-A-7 turboprops were used, but by the time the aircraft, dubbed C-123T, was complete it had new wet wings, an Auxiliery Power Unit (APU) to assist with power steering of the control surfaces, and heating system for the cargo compartments that also fed a new deicing system. Budgetary restrictions forced the Thai government to abandon the program in 1981, and with a lack of interested parties development of the C-123T stopped. However, it concluded the life of the C-123 by making it the only (at least this is claimed) aircraft to operate as a glider, jet, combustion, and turboprop during its history.