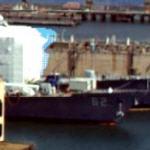 In early April 2004, it was announced that she would be one of fifteen destroyers and three cruisers which would be deployed to counter ballistic missile threats worldwide. She arrived in Yokosuka, Japan 30 September 2004 to join the U.S. 7th Fleet after participating in a personnel exchange known as "Super Swap". 140 sailors from USS O'Brien (DD-975) transferred to Fitzgerald and 95 of Fitzgerald’s sailors joined the decommissioning unit for O'Brien. Her new homeport is Yokosuka.
Links: en.wikipedia.org
918 views