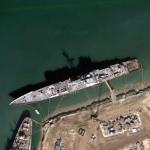 Vincennes is best known for shooting down an Iranian civilian passenger jetliner, Iran Air Flight 655, over the Persian Gulf on 3 July 1988, killing all 290 civilians on board (including 38 non-Iranians and 66 children), sparking an international incident between the Islamic Republic of Iran and the United States of America.