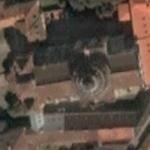 The dome of the St Casimir’s Church and the Jogailaitis family crown on top of it are one of the dominating structures in the panorama of the Old Town. This was the very first baroque church in Lithuania, which the Jesuits built during 1604–1618 in memory of Saint Prince Casimir and with the support of the Grand Chancellor of Lithuania, Leonas Sapiega.

St. Casimir’s Church is one of the earliest, classic baroque structures in the city. It was designed after a famous foremost baroque church in Rome. In the middle of the 18th century during the reconstruction of the church, a several-tiered dome with the high lantern surmounted by a crown was built. This is the only such large and impressive dome in the entire lands of the former Grand Duchy of Lithuania. The interior was made extraordinarily ornate during the reconstruction.

In 1812, Napoleon’s army damaged the church. After the uprising of 1830–1831, it was turned into an Orthodox church and unsuccessfully reconstructed. During 1864–1868, the Cathedral of St Michael was installed in it according to the design of the architect, N. Tchiagin. In 1917, St Casimir’s Church was at last returned to the Catholics but was again damaged during the World War II and was closed. In 1961, it was adapted to the needs of a Museum of Atheism. Later the museum was abolished and the church returned to the believers again.

An exceptional feature of the interior is the wonderfully organised space. The church is decorated with three decorative and ornate late baroque style altars, which were created by T. Žebrauskas in 1749–1755. 17th century frescos have survived in the basement. The construction of the monastery dates back to 1604–1615. This had a library and a hospital and many famous Jesuits used to live there. The first Lithuanian gymnasium of Vilnius (1915-1919), later, A. Vienuolis Secondary School, operated within these buildings.
Links: www.turizmas.vilnius.lt
1,249 views