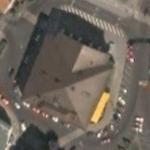 The building was designed at the end of the 18th century by the famous architect, Laurynas Stuoka-Gucevicius (1753-1798). The square, two-story structure, with its six Doric columns supporting its portico, faces a triangular square, looking out on the beginning of Pilies (Castle) Street. At the other end of Pilies Street stands another of the architect's creations, his masterpiece, the Cathedral. The buildings he designed connect the most important parts of Old Town: the Castle, seat of the Grand Duke, and the Town Hall, symbolizing the city's self-governance.

In 1387, the Lithuanian Grand Duke and Polish King, Jogaila, granted Vilnius the right of self-rule follooving the example of Magdeburg. A short time later, the city built the Town Hall (in German, "das Rathaus"), the seat of the City Council. The Town Hall is mentioned as early as 1432 to be standing in the same spot where its successor is now. Only Gothic basements are left from the old Town Hall of Vilnius. In 1572, Braun and Hohenberg's Atlas of European Cities pictured the Town Hall with a tower reaching for the sky. In the 17th century, the Town Hall clock was installed in it and bells were hung, in order to notify residents as to when to put out their lights or to warn them of some danger.

In the 17th century, the Town Hall contained courts, the burgomaster's office, the- merchants' council, the archives, a weapons room, a prison (near the gates), and, in the square itself, a place for punishment, the so-called poles of shame. All around the Town Hall were rows of stalls built with city funds.

The misfortunes of the city and the state did not leave the Town Hall unscathed. In 1610, there was a fire. From 1655 to 1661, there was the war with Russia. At the beginning of the 18th century, there was the Northern War. The Town Hall was often repaired and rebuilt. In 1748, a fire, starting near the Subacius gates, scorched the city, and the Town Hall went up in smoke, too. The task of restoring the building was entrusted to the well-known Vilnius architect, Jonas Kristupas Gliaubicius. The 138- foot-tall tower was reconstructed, two bells were hoisted to its peak, and a clock was installed below them. Architect T. Russelis finished the work in 1769. However, the restored tower a short time later began to sway. In 1781, the magistrate appealed for help to an architect, L. Stuoka-Gucevicius, who had just returned from abroad and at that time was building the Verkiai mansion for Bishop Ignas Masalskis. The young architect prepared a daring proposal for shoring up the tower, but he was not in time. Having just begun the work, on 19 June 1781, the tower collapsed with a roar, damaging the Town Hall building in the process. The same year, the architect drew up a proposal for a new tower, which a commission rejected. In 1786, he again submitted a proposal for reconstruction, three of them, in fact. They had to be approved by King Stanislovas Augustas Poniatovskis himself. At first, the architect proposed a more ambitious building, an extended acute-angled building, ending in a cross, with a side facade of colonnades and with a high, round tower adjacent to the rear facade. But a cheaper and more modest tower less design was chosen instead. Construction began in 1788, and then changing political fortunes put a halt to it. The second partition of the Commonwealth in 1793, Tadas Kosciuszka's rebellion in its wake, and the third partition of the Commonwealth in 1795, along with Lithuania's annexation by Russia, did not help matters along. The ?own Hall was finally finished in 1799, after the architect's death.

In 1845, it was decided to move the magistrate out of the Town Hall and reconstruct the building to serve as a town theater. The theater operated in the Town Hall until 1924. The building was no longer appropriate for the magistrate office's needs, so a Vilnius architect, Steponas Narembskis, submitted a proposal to restore the building for use in an official, representative role. From 1936 to 1939, the columns that had been torn down were restored and wide steps with marble banisters leading from the covered courtyard to the second floor were built. These changes harmoniously blended in with the interior.

However, the Town Hall is only now beginning to be used for the representative function it was intended for. In 1939, upon Lithuanians recovery of Vilnius, the Town Hall was completely restored, but in the autumn of 1940, by order of the Soviet authorities, the city's government was set up in it, and later, the State Art Museum was moved there. In 1995, the Art Museum moved to the Chodkevicius mansion, and the Town Hall was given back to the municipal government on 1 January 1998 The city authorities decided that the most appropriable use for the Town Hall was exactly that function which would best recall its historic past: a place for city celebrations, as in many of the old Town Halls of Europe.
Links: www.vilniausrotuse.lt
1,457 views