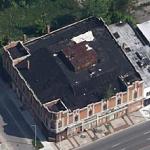 By Mike1989 @ 2013-10-03 04:21:09
@ 42.372581, -82.946195
Detroit, Michigan (MI), US
The Vanity Ballroom Building is a public building located at 1024 Newport Street (at Jefferson Avenue in the Jefferson-Chalmers Historic Business District) in Detroit, Michigan. Although the building is recorded as the last intact ballroom of the multiple Detroit dance halls that hosted big bands in the 1930s–50s, such claims ignore the abandoned yet still standing Grande Ballroom on Grand River Avenue. It was listed on the National Register of Historic Places in 1982.

The ballroom was closed in 1958, but reopened in 1964 for one night a week. It was eventually completely shuttered, and although it played a bit part in Eminem's movie, 8 Mile, it remains closed and dilapidated.
Links: en.wikipedia.org
1,019 views