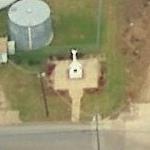 By Ozzy @ 2007-01-20 20:46:20
@ 32.668928, -97.466486
Benbrook, Texas (TX), US
Vernon and Irene Castle were a husband-and-wife team of ballroom dancers of the early 20th century. The Castles' initial fame began in Paris, where they introduced American ragtime dances such as the Turkey Trot and Grizzly Bear. While conducting flight maneuvers at Benbrook Field near Fort Worth, Texas Vernon's plane crashed and he was killed instantly.
Links: www.roadsideamerica.com, en.wikipedia.org
716 views