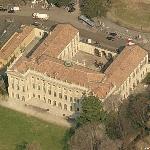 By Effi @ 2008-03-03 05:16:43
@ 45.472717, 9.199658
Milan, Italy (IT)
It was built for the Count Ludovico Barbiano di Belgiojoso in the 1790, with a project of the Wiener architect Leopold Pollock that was a student of the Milan architect Giuseppe Piermarini. The project was a small revolution in the architecture. Pollock projected a giant villa with a typical dimension of the building and of the park of a suburban villa, but located in the heart of the city. with canals, artficial lakes and falls, small forests and a large esplanade of grass. The gardens where projected by Ettore Silva.

From the 1796 The Villa Belgiojoso changed name in Villa Reale, 'cause it was the house of Napoleone Bonaparte (King of Italy) and then of the Vice-King Eugène Beauharnais.

After the fall of Napoleone the Milan Reign came back under the Austrian dominance and the Villa Reale begun the home of Johann Josef Wenzel Graf Radetzky von Radetz, well know as Feldmarschall Radetzky (and famous for the Radetzky March,a march composed by Johann Strauss Sr and played as final song at every New Year's day concert in Wien). He lived here for many decades and died in the Villa in the 1858.

In the 1919 the Milan Council bought the Villa Reale and from the same year the Villa became the Museum of Modern Art. Still today is the most important museum of Italy for XVIII and XIX Century Italian Art. Another half part of the area is the location of the PAC (Padiglione di Arte Contemporanea), the most important Italian Museum of Contemprary Art, opened in the 1934, then bombed during the II W.W. and rebuilt in the 1954.
Links: villabelgiojosobonaparte.it
1,413 views