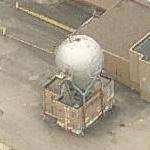 By mlc1us @ 2008-01-28 17:02:05
@ 40.411127, -79.84364
Pittsburgh, Pennsylvania (PA), US
The Atom Smasher was the centerpiece of the first large-scale program in nuclear physics established in industry. Westinghouse physicists designed the 5-million volt Van de Graaff generator, then the largest of its type in the world, to create nuclear reactions by bombarding target atoms with a beam of high-energy particles. The 5 million volts served as a voltage source to accelerate these particles down a vacuum tube extending from the top of the pear-shaped pressure vessel to a target 47 feet below. The steady voltage of the generator, its chief advantage over other types of accelerators, allowed the reactions to be measured precisely, thus contributing to basic knowledge of nuclear physics. Research with the Atom Smasher in 1940 led to the discovery of the photo-fission of uranium, part of the process involved in the generation of nuclear power.
Links: www.ieee.org
1,485 views