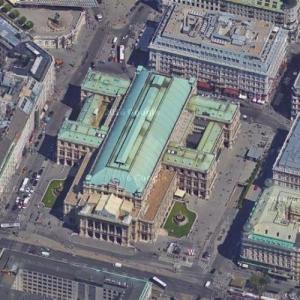 The Vienna Opera House has a world-wide reputation for its first-class opera performances and is also known because of the Vienna Philharmonic Orchestra. A night at the State Opera is one of the most impressive events any visitor to Vienna can experience.

The building itself closely resembles Italian Renaissance, as this epoch was immensely important for art and music. The first operas were written and performed in Italy during the 16th century.
The loggia towards ring boulevard aims to emphasize the house's openess to the public. It is adorned with a precious cycle representing the Mozart's 'Magic Flute' and other famous operas accomplished by painter Moritz von Schwind.
Numerous statues and figurative embellishments at the inside and outside of Vienna opera underline the festive character of the house.
Links: en.wikipedia.org
1,860 views