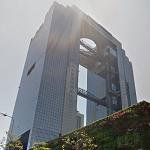 By kjfitz @ 2010-06-21 07:32:53
@ 34.706199, 135.491104
Osaka, Japan (JP)
"The Umeda Sky Building is the seventh-tallest building in Osaka City, Japan, and one of the city’s most recognizable landmarks. The 173 m (568 ft) building was designed by Hiroshi Hara. It was constructed by Takenaka Corporation and was completed in 1993. Located in the Umeda district of Kita-ku, the building was originally conceived in 1988 as the “City of Air” project. It consists of two 40-story towers that connect at their two uppermost stories, with bridges and an escalator crossing the wide atrium-like space in the center. The escalater ride is an event in itself as it feels like you are floating up into the sky."
Links: www.myinterestingfiles.com
631 views