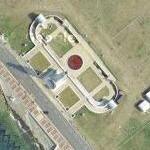 From the plaque on the monument:

"This memorial commemorates officers ranks and ratings of this Port who died at sea during the wars 1914-1918 and 1939-1945. Actions in which they fought are recorded in the registers and on the memorial itself

Similar memorials at Plymouth and Chatham commemorate men and women of those manning ports while merchant seamen who died from enemy action and have no grave but the sea are commemorated in Liverpool and at Tower Hill in London. The names of those who died during the Second World War whilst serving in the Royal Naval Patrol Service or the Fleet Air Arm and whose graves are unknown are respectively on memorials at Lowestoft and at Lee on-the-Solent.


Other memorials, at Halifax and Victoria in Canada, at Auckland in New Zealand, at Bombay in India, at Chittagong in Bangladesh and at Hong Kong commemorate sailors who came from those parts of the Commonwealth while the Newfounland Memorial at Beaumont Hamel in France bears the names of 229 Newfoundland sailors lost at sea during the First World War.


Of the 24,588 men and women whose names are on this monument 9,666 died during the First World War and 14,922 including 75 from Newfoundland who served in the Royal Navy during the Second World War. All were buried at sea or were otherwise denied by the fortunes of war, a known and honoured grave.