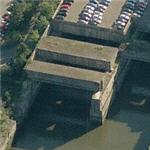 In the spring of 1944 a special committee decided that a U-Bootbunkerwerft (shipyardbunker) should be build for the production of the hullsections 3, 5 en 6 of the U-Boot type XXI. This bunker was given the codename "Hornisse". It was build in the harbor in Bremen, by a company called Wayss & Freytag.

The U-Boot hull sections were produced by Deutsche Schiffs- und Maschinenbau AG (Deschimag), Werk Weser AG in Bremen, by concentration camp inmates from the Aussenlager Bremen-Blumenthal. The planned was to build 42 hull sections per month.

On 30-03-45 the bunker was bombed by the American 8th Air force. It was hit several times.

Because of the end of the war, the bunker wasn't finished. It was never used for production. Today the bunker is used as a foundation for an office building.
Links: www.geocities.com
1,327 views