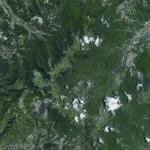 Yangmingshan is the home of famous writer Lin Yutang, the summer residence of Chiang Kai-shek, residences of foreign diplomats, the Chinese Culture University, the meeting place of the now defunct National Assembly of the Republic of China at the Chung-Shan Building, and the Kuomintang Party Archives. Yangmingshan is also the rumored location of an electronic intelligence listening post maintained by the Republic of China government in cooperation with the United States to monitor communications within the People's Republic of China.

The Wuchih Mountain Military Cemetery borders the Hsichih end of the National Park.

The National Park is famous for its cherry blossoms, hot springs, sulfur deposits, fumaroles, venomous snakes and hiking trails, including Taiwan's tallest and one over the extinct volcano Seven Star Mountain.

Yangmingshan was originally called Grass Mountain because the main mountains of this region are grassy. In 1950, Chiang Kai-shek renamed the place Yangmingshan in honor of Wang Yangming, a Ming Dynasty Chinese scholar and military official.
Links: en.wikipedia.org
786 views